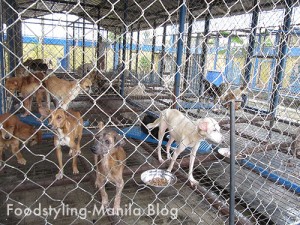 I’ve finally found an accessible shelter near my house! I’ve been wondering if I’ll ever actually get my butt to PAWS but it looks like I don’t have to go all the way there because there’s actually a shelter near our place! So I gathered some eggs, vegetables, chicken, rice, and found a huge plastic of noodles my mom was trying to get me to cook…and found some really hungry mouths who were going to have a good meal.

I heard about the Mandaluyong dog shelter shortly after I put up the Whole Pet Kitchen site. Someday, I want the pet bakery to start helping out local pet causes and I think I came to the right place. I had my own doggie “pancit” with vegetables and lotsa eggs prepared at home, while I gathered up some chicken and rice, with a bit of tongue and vegetable trimmings from the school. I ended up with 5 gallons of mixed food that even jack would be salivating over. 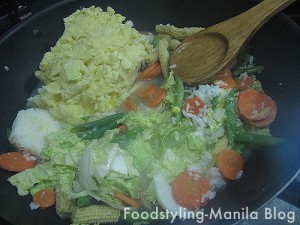 We got to the shelter a bit late…9:30, they were already feeding the dogs! I saw a giant orocan filled with pellets mixed with water. We quickly dispatched our food and the people who were doing the feeding (some were from Philippine Dog Owners club) laughed and said “Oy may pancit dito!” 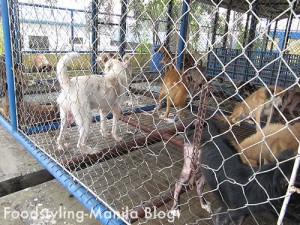 The dogs were emaciated, but they still had the spirit in them to lunge for the food. Some of them fought, it got a bit bloody, it got really noisy, but at least a lot of them had some food in their stomachs. We saw dogs that bullied smaller dogs for food and I tossed a salmon moringa biscuit over for them…too bad some of the flooring gaps were too wide and the biscuits would fall through! A lot of the dogs were also unvaccinated so I strongly suggest a change of clothing and shoes if you have pets who are sensitive back home, they also have people there who do the feeding for you since you nipped by a nervous and hungry dog. So basically you can prepare and mix the food, put them into bowls and give them to the caretakers and watch the dogs eat. It was a weird feeling, like a bittersweet tugging in your heart as I watched the dogs lunge for the food. 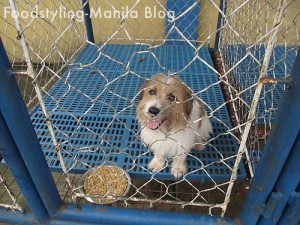 The dogs at the Mandaluyong shelter need lots of food. Down in the parking lot, I saw some police dogs in training, there was even a little guy who looked like the ungroomed version of our Porto. It made me think about how lucky our dogs were.

I’m glad I finally found the shelter so I could go there on my own. If you’d like to do the same, they insist that you place your donations in the log book. They are in need of METAL bowls (apparently, the dogs are so hungry they will eat plastic), detergent…FOOD…FOOD…FOOD…FOOD. If you have any donations or would like to donate in kind, you may do so by contacting mandaluyonganimalshelter@gmail.com 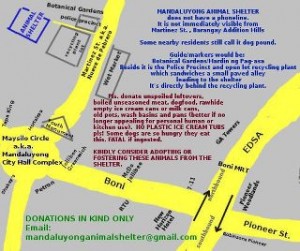 I’m actually thinking of having another go sometime after Christmas…would you guys like to join me? 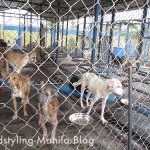 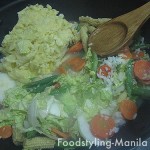 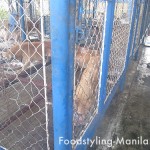 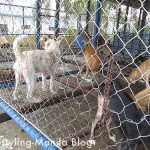 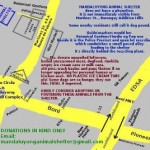